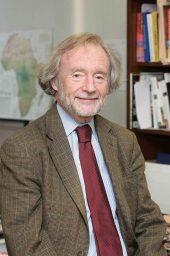 Fred Gault is a Professorial Fellow at UNU-MERIT in the Netherlands, a research and training centre of United Nations University. In this role, Dr. Gault coordinates case studies work on innovation in a selection of African countries. He is also Professor Extraordinaire at the Tshwane University of Technology (TUT) in South Africa and a member of the TUT Institute for Economic Research on Innovation (IERI).

Dr. Gault was previously a Visiting Fellow at the Canadian International Development Research Centre (IDRC) in Ottawa and also worked on the OECD Innovation Strategy, released in May 2010. Until April 2008, he served as a Director at Statistics Canada and was in charge of the division responsible for the development of statistics on all aspects of research, development, invention, innovation and the diffusion of technologies, as well as on related human resources. In addition, he was responsible for the development of statistics on telecommunications and broadcasting, internet use, and electronic commerce. Dr. Gault also served as Chair of the OECD Working Party of National Experts on Science and Technology Indicators (NESTI) (2002-2008) and of the Working Party on Indicators for the Information Society (WPIIS) (1997-2002).

Dr. Gault’s principal interest over the last 25 years has been the development and the use of statistical indicators in support of the policy process, particularly in the area of innovation. More recently, he has contributed to the innovation and R&D survey work coordinated by the Office of Science and Technology of the New Partnership for Africa’s Development (NEPAD). His most recent book, Innovation Strategies for the Global Economy, was published jointly by Edward Elgar and the IDRC in 2010.

Dr. Gault holds a B.Sc. in Physics from Carleton University in Ottawa and a M.Sc. in Mathematical Physics from McGill University in Montréal. He has a Diploma of the Imperial College (DIC) and a PhD in Theoretical Physics at Imperial College, University of London. He also holds a B.Sc. (Econ) from the University of London, and in the U.K. he is a Chartered Engineer (C.Eng.), a professional member of the British Computer Society (MBCS) and a Fellow of the Institute of Physics (F.Inst.P).